The following article appears in the special edition of LA Galaxy x Los Angeles Magazine available only to Galaxy Season Ticket Members. For more information how to become a Galaxy STM visit: LAGalaxy.com/Since96

The bees are in charge here, enjoying endless wildflowers with nary a human in sight. They buzz happily, encouraged to exercise their instincts and pollinate all the blood orange orchards and summer squash blossoms that fall within their dominion. Keepers adjust frames and restructure interiors regularly. In the proper conditions, these bees will produce about 800 pounds of honey per year. Nearby, the only five-time MLS Cup-winning club in his-tory conducts its business.

Dignity Health Sports Park (DHSP) is the world’s most sustainable soccer facility. It was the first to use recycled water for irrigation. In 2016, it became the first soccer-specific venue in MLS with an LED lighting system, cutting energy consumption by 60 percent. With that came the installation of the largest AI-powered energy storage system of any U.S. stadium. There’s a rack lined with California cruiser bicycles that employees use to reduce gas-powered trips around the sprawling grounds. 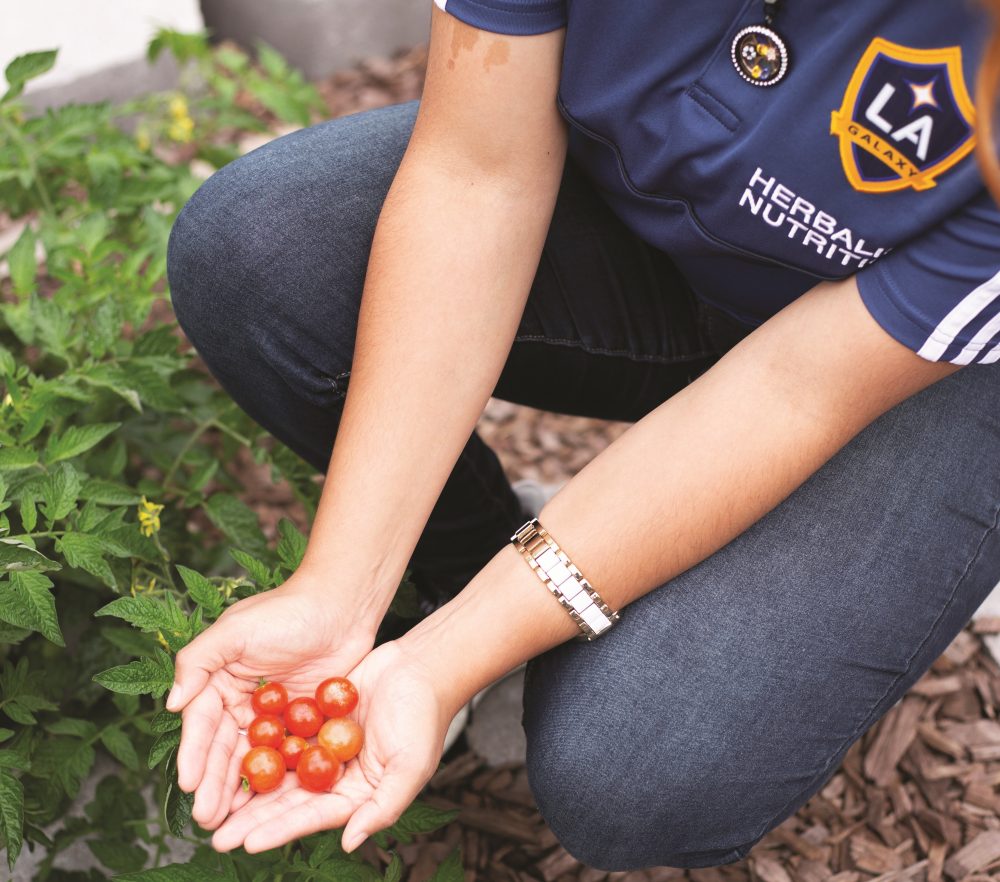 Earlier this year, the Galaxy and DHSP were nominated for the Sustainability & Community Award by the StadiumBusiness Awards for its Protect the Pitch initiative, the umbrella for Galaxy sustainability efforts. But a consistent dedication to experimentation and incremental improvements driven by people at the park has transformed what was already an environmentally innovative facility into a living organism—one that’s feeding people, forging bonds and changing habits outside the park.

Katie Pandolfo, DHSP’s general manager, leads new sustainability initiatives. “We’re in a unique position here and have people who like to push the envelope and say, ‘Okay that’s great, we can recycle a tin can, but what else can we do?’” Pandolfo, nicknamed Mighty Mouse by staff, emphasizes that everyone is responsible for constantly bringing new ideas. “I think these things evolve over time. There’s no one thing that happens. It’s just kind of these baby steps that keep growing and the ideas keep coming.”

Consider Galaxy Garden. What began in 2017 as two four-by-eight garden boxes in an unused area between the tennis stadium and the loading dock has grown into an expanse of seasonal produce, citrus groves, a chicken coop and a greenhouse that regularly provide food for staff and player meals. There was never a single, overarching garden-construction plan, only ideas that kept accumulating and working. Now, 25 employees have boxes they tend, cultivating an impressive variety of fruits, vegetables, greens and herbs. 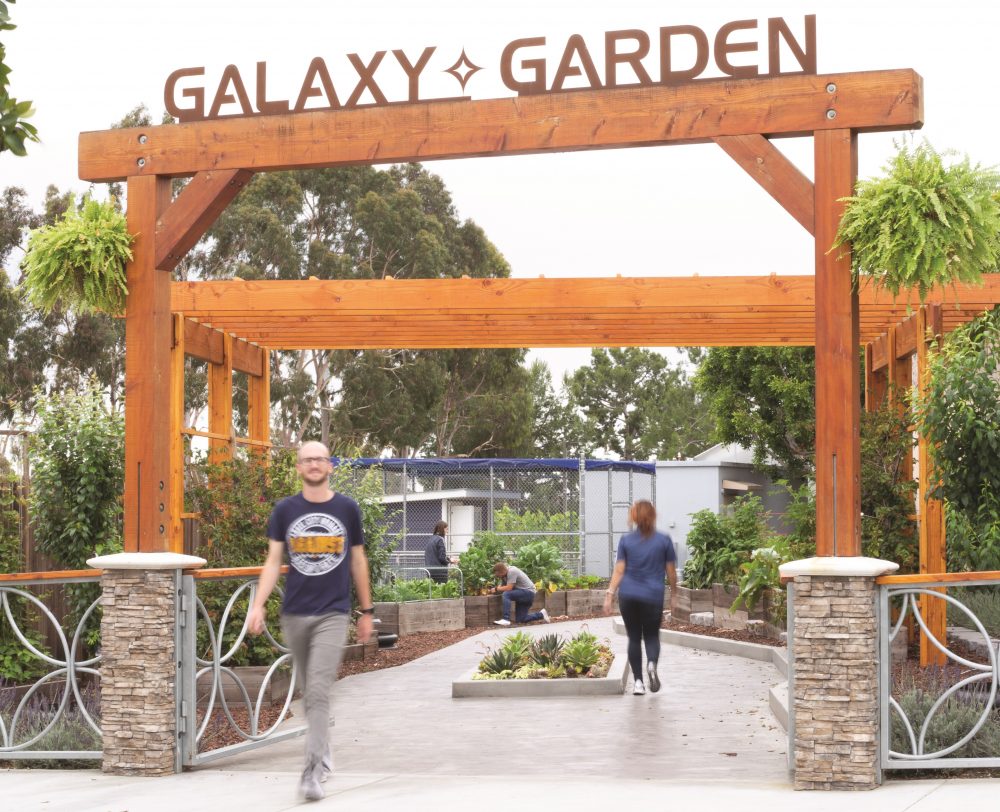 Chris Hybl, a communications and digital specialist for the Galaxy, is an active member of the garden club that’s sprung out of the expansion. “I have some pattypan squash, straightneck squash, eggplant, French green beans and a few heirloom tomato varieties. I also grow gem lettuce in a box inside the greenhouse. I’m about to start some date trees from seed.” The club meets on Friday afternoons to exchange tips and get advice from DHSP’s chief engineer, Gary Wilson, and grounds staff for agricultural office hours. Recently, a groundskeeper left a note with a sickly leaf taped to the greenhouse door, admonishing the team while educating: “This happens when you’re watering from the top. Don’t do that.”

Once the garden began to flourish, Pandolfo wanted chickens. Wilson and Adam Duvendeck, VP of Operations for AEG, garden club member and home brewer, came on a weekend and built a coop. “It’s a pretty extravagant chicken coop,” says Wilson. “We have staff 24 hours a day, seven days a week, so they’re probably the most entitled, spoiled chickens you’ve ever seen in your life. They are really living the life.”

Now, the garden club has a regular schedule for members to take home fresh eggs, and Duvendeck has hop trellises. He’s done three harvests, the last of which produced about 20 gallons of IPA and pale ale. But as Pandolfino was thinking fowl, Wilson wanted bees. For years, DHSP exterminated the wild swarms that would make their hives on the grounds. Wilson angled for commercial hive boxes, and now runs an eight-hive apiary. Park visitors who sweet talk the right bartender on the right day can get fresh honey margaritas. 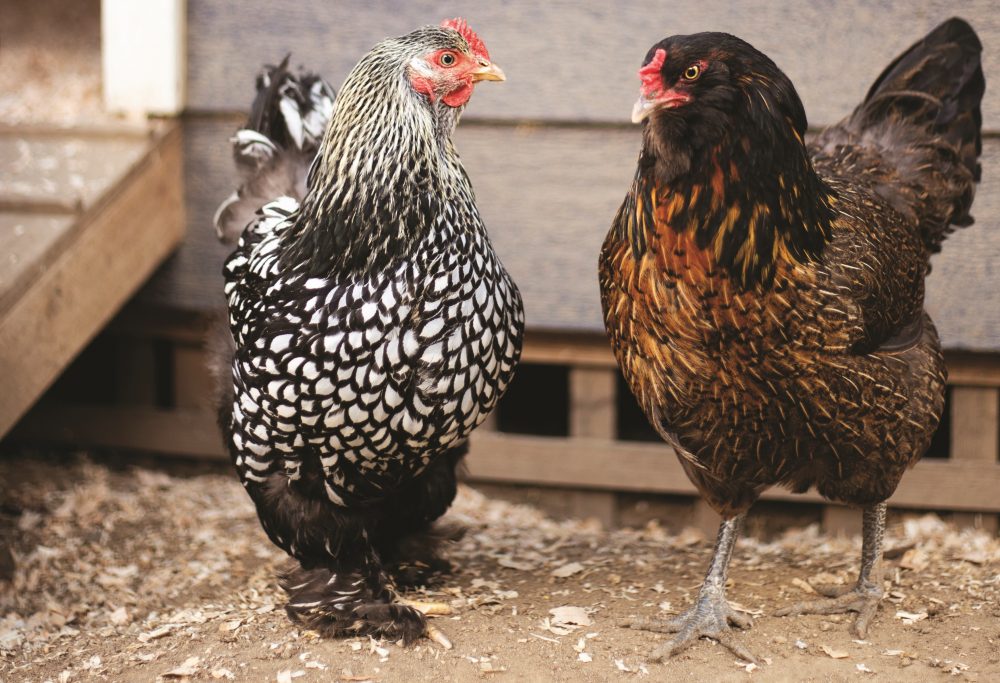 “[People] see the different initiatives we’re taking—like no longer serving straws and composting cups, composting food—and then they take that and bring that [thinking] home with them,” says Pandolfo.

The organization works far beyond the 126 acres of DHSP. The Galaxy’s charitable foundation works with Garden School Foundation, bringing teachers to build gardens at schools and teach kids about healthy eating. The Galaxy helped build a garden at Carson’s Leapwood Avenue Elementary School and revisited as part of Protect the Pitch in April, to help beautify and maintain it. The Foundation also hosts field trips at DHSP for local students, where they can visit Galaxy Garden and learn from club members, take cooking classes and visit Galaxy practice. This season, the park began working with food rescue startup Copia to get leftovers from the stadium to local food shelters. The partnership is expected to provide tens of thousands of meals and create a carbon footprint decrease equivalent to removing 20 cars from the road for a year.

These initiatives helped secure DHSP’s place as the unofficial green stadium of the 2028 Olympics, hosting rugby, tennis, modern pentathlon, field hockey and track cycling. The LED array will get attention, and the garden will charm plenty. But right now, people are excited about the new ORCA digester, an imposing machine that composts wet food items into sludge that can safely go into the sewer instead of being hauled out. There are already composting bins in the garden, but Pandolfo plans on rolling out a composting program for the entire staff, whereby all the park’s food waste will be consumed by the great machine. The ultimate goal is an entirely trash-free day at the park.

Wrapping up the tour, Pandolfo laments the ficus trees that remain on the grounds from the park’s opening in 2003. “They’re messy. They’re invasive. They have huge root systems. I wish we had planted other trees when the property was built, but they’re here.” It’s the only sour note of the tour from Pandolfo, and she moves on quickly. Five days later, Wilson reports they’ve begun selling off the ficus trees. It’s time to clear room for a vineyard.